Morning all, it’s bright and early on a Monday morning, well, not so bright or early, but it is Monday 😦 actually I’m not so sad about that fact, school resumes for the year on Wednesday (for 2) and Thursday for the other, so I’m happy that my routine will change back to some normalcy.
While I start on my first coffee, I thought I might share a bike ride we took the other day. After being pulled apart and serviced hubby wanted to take it for a drive and test it out. Well, he came home to get me and we went straight back to the city to get them to look at it. Not a good sign.
All I had asked for was a windy road. We took the scenic route to Hobart, from Kingston you head along the coast to Taroona and Sandy Bay rather than up the highway.

From there, even though it was after 5 and in typical Tassie fashion was cooling down, even though the sun was still up, we headed up. Mt Wellington, aka The Mountain. There’s something most people don’t think about when in a car. Shadows are cold. Once you’re out of the sun, the air is fresher, even at slow speeds.
I never tire of the view from the top, even on a hazy day like it was. The photos aren’t great, but we got some good ones of the bike overlooking the edge. 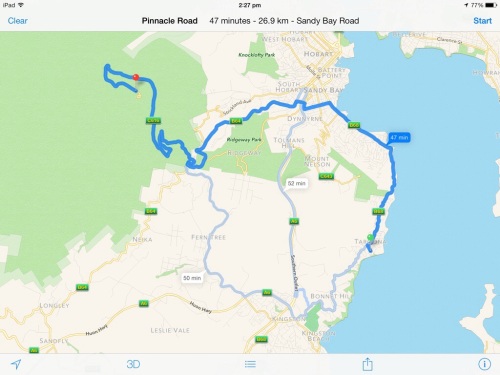 From there, we headed towards. Huonville, via Fern Tree. Part of Fern Tree is at the base of the mountain, and the rest is scattered along the old highway to the south. It’s always a nice drive on this road, even if the road isn’t very good, doing something a little different stops you from being bored.
At Huonville we a stopped in to see a friend and by the time we left it was 8, the sun was going down and the chill was certainly rising.

Taking the coast road, through Cygnet and round the point to Verona Sands and home. The sun was going down, we were on there wrong side of the hill, so it was darker anyway, the air was cold – and we only had ‘summer’ jackets on, you don’t want the fluffy inserts when its warm and sunny – and there was something crawling over my head under the helmet. Well that’s what it felt like, it was itchy as all… And you can’t scratch with thick gloves and a space helmet on your head. I was off that bike and had the helmet off in seconds when we got home. Ahh, bliss, scratchy scratch…

The house was blissfully warm and adding to that a toasted sandwich and a hot drink, my day was done.
I’m definitely going to miss this when April comes around. There will be very little riding over winter til we get proper gear.
Some shots from the top of the mountain. 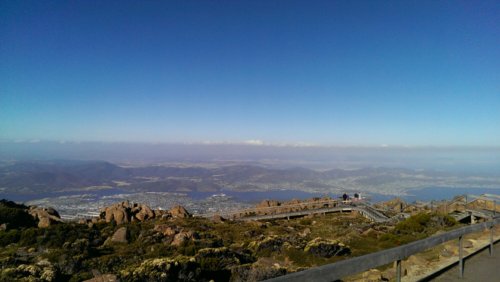 Overlooking Hobart and eastern suburbs. So much nicer on a clear day.

And the bike, taken further down the road from the lookout

Happy Monday and have a great week 🙂
Jen