Long weekend on the Dairy Farm…

Saturday morning arrived all too quickly and I got the kids up too early, then ran out of milk when I really needed that extra coffee hit.  But we survived.

I packed the car, pretty good at that after all the trips we’ve been on, and we set out.  It was cold, wet and windy and I was getting wired.   By the time we stopped at Kingston for a couple of errands and I was able to get my coffee, I was feeling well overdressed with jacket and scarf.

Next came the airport (for 12.45) and a quick stop at Macca’s before we finally  got on the road properly at 2pm.

Bored in the car - taking silly pictures of the kids.

Having the eldest in the front seat due to his broken foot meant the other half had to suffer the back seat – neither of us are good with that – so we pulled up at Campbell Town for a leg stretch and a driver swap.

‘A long drive’ I wrote on my FB wall – we’re definately back into being Tasmanian and ‘scared’ of the distances.  Funny after being in western Qld where 500kms gets you practically no-where.  But as we have some of the best driving roads you’ll find anywhere, it was a good trip, even if it felt twice as long, arriving in the dark and cold.

Sunday morning I am rudely awoken at 4.30 am so the two dads can head out for  the morning milking.   After few hours later I am woken again by the noises of small children to find it’s only 7am.  Argh, so tired.

At 9.30 we head out to the calving shed to watch the new calves being fed while in the other shed the cows are being milked.  I have now seen pretty well everything!  A trailer with a row of teats round the edge like lights.  The calves had already used this and were inside the shed.  The kids climbed the fence to pat them and I wandered around snapping pictures.

Checking out the calves.

All is good on a dairy farm until you open the window or door and then – phew, peg on nose stink! – it really hits you hard, and for those with a weak stomach, the throat would constrict somewhat.  And the whole lot permeates the house – not a ‘whole place smells like cow sh*t’ but just a faint ‘perfume’ of something.  And it stains clothes.

There is something to be said about new life, the calves running around with their legs going all directions and their tails flipping around, silly looks on their cute faces.  But don’t get in the way when they are feeding.  It’s like feeding time at the zoo.  I got to see the ‘porta-teat’ as  my husband called it in action.  What a weapon, 45 calves all jostling for position and then nibbling on their neighbours snout when they want to steal that particular teat…

A change of pace after lunch as we head out to clear the orchard of the cut limbs and mow the lawn.  I must have looked a sight with bucket hat nad hot pink gumboots!  I also should have left my flannel on as I now have scratches all up my arms and they stung in the shower – ouchy.  But it felt good to get out and do somework, and it looks so good now.   Kyle, my second eldest,  got on the four wheeler and was dragging the larger branches away – loving it. You should have seen his smile 🙂 Broad that it was.  And a very smiley husband and his dream machine! 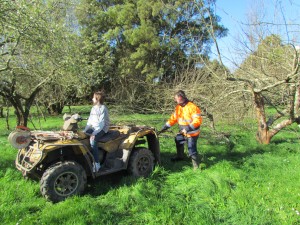 The 'heavy weights' helping us girls remove the rubbish. 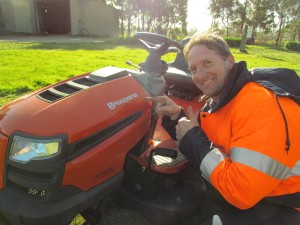 My man and his dream machine 🙂

That night was ‘birthday dinner’ as hubby and I have both had our birthdays and our eldest is having his while we are visiting.  So a roast lamb and  chook wiht all the veg and a 3-layer cake was one the menu.

OMG! That was some birthday cake.  Mainly for my hubby, he did turn 40 after all.  A fantastic 3 mud cakes with choc slices on the sides and dug out to look like an open cut mine complete with diggers.  Golly it tasted fantastic, and I managed to eat all my piece too.  (No wonder I put weigh on this week, I joked that we would have to walk to burnie the next day to work it off, lol)

The mining mother of all birthday cakes.

Monday morning and my lovely sister looked after all the kids while hubby and I took a drive to Burnie, an hour away.  He had an appointment so we made use of the opportunity for ‘date day’.  I wandered round checking out the shops, before we found a small cafe on the Esplanade and had fish and chips for lunch, that came in a paper cone!  Not bad, even if my hubby was thinking on Perth time (two hours behind, lol).

Tuesday, the men are still smelling like you wouldn’t believe, it is not appealing or sexy at all, I don’t like beer breath, but cow smell on clothes is worse.
My sister and I pottered around and did a few gardening jobs, moved some of the woodpile, then after lunch we took a drive (with 3 kids smelling and looking pretty icky after being at the calf shed) over to Stanley, a half hour drive away.  This palce is beautiful, a small town at the base of a large land mass called The Nut.  A great touristy town, and the nut has spectacular views from the top.  We didn’t do it this time, but I did walk up and down while I was quite pregnant 8 years ago.  Couldn’t face the chair lift, my vertigo had kicked in, and walking felt like the better option. 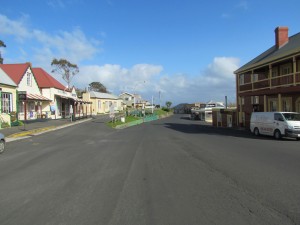 Street-scape in StanleyThe 'Nut'. not the best picture as the weather had come in by the time we left to go home. 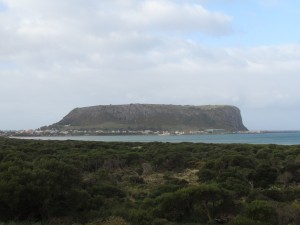 The 'Nut'. not the best picture as the weather had come in by the time we left to go home.

The purpose of this visit was so my sister could buy my son a piece of cake for his birthday!  We filled the quantest little cafe and took over 3 table between us.  2 adults and 6 kids, a pram and a set of cructhces with a plaster leg to get in the way….  the coffee was good and the lady didn’t batt an eyelid at all the scruffy kids and gumboots outside the door.

Wednesday morning and it’s time to go home.  I love visiting but going home is good.

Although I now have full baskets clogging up my laundry – tomorrow’s job I spose.  Gotta be done.

So my little sojourn to the ‘country’ is over for a few months at least.  It’s now back to school and the usual grind.

Til next time, keep smiling 🙂