Peppermint bay – a slice of Paradise

I had been hanging out all week waiting and hoping with every rain drop that it would leave us in peace just for an hour. I was meeting a friend for lunch and sitting outside is much preferable to being inside, it’s not yet winter and I love to make the most of outside eating while I can.
Our destination? Peppermint Bay. Just up the road in Woodbridge which I’ve only visited once since it was built in 2003, and that was twelve months ago. Read about it here. 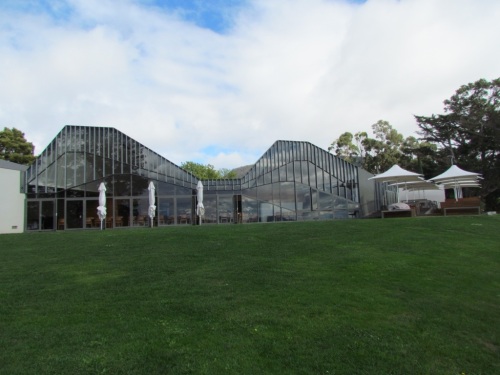 Looking towards the main restaurant from the lawns, with the water behind me.

Back when it was built we were in no position to be eating out with 2 young kids and a less than ideal income. Fast forward 9 years and all I am hearing is that it’s way too expensive and all I should get in a coffee and muffin. Hmm? My American friend and I took the all-inclusive ferry and lunch deal (special lunch made just for ferry patrons) but I have not ventured in on m own until a month ago. After gym class one day (today’s) friend asked if I would like to join them for lunch, I said yes to a coffee, the ominous warning still ringing in my ears.
Boy did I get a surprise. Not only was the lunch menu good value it is cheap enough to have a special treat each month without feeling too guilty. A variety of side dishes, small mains and a good selection of kids meals all at very reasonable prices. Nothing really over the $20-25 mark.
I tried their fries which came with the most amazing aioli – my friend said she could lick it straight out of the bowl, and after trying it, believe I would too – and the side of green veges. Oh. My.god. Crunchy vegetables with a (non creamy) lemon sauce, divine! Call me sad, but I’m a vege nazi, love them!

It had been a good month since I had last been and my friend was no longer doing gym class with me, so we organised to have lunch and catch up.
It had been on my mind to order the salad she normally has. Ocean trout salad. I had had a taster and was aching to have a whole one to myself.
Once ordered we sat back and chatted until our meals came.
Doh. Now I want to write, do you think I can remember the name of her dish. Nope. Salted fish bites of some sort essentially. I shared a half one and it tasted heavenly. Light, creamy flavour, not too many herbs and a texture that was rather like mashed potato. It arrived on a board smothered in aioli with extra salt and a cut lemon. A small meal, but at $11 not bad value. Picture taken with my phone, in rather bright light making it a very not so arty food picture.

My salad on the other hand was not what we expected. The one I had tried was a potato salad with some greens, beetroot chunks and trout on top. All with a lovely light and creamy mayonnaise. A meal to die for.
Today’s, ($18 meal) was unfortunately nothing like it. The potato had gone and in it’s place were chunks of cucumber and radish, a lot more greens, beetroot, next to no dressing but plenty of trout. Trout is a lighter version of salmon. Where salmon, smoked especially, has a heavy strong fishy flavour, trout is lighter and creamier. Well, going on my limited experience anyway. Again, not so arty too bright phone picture. 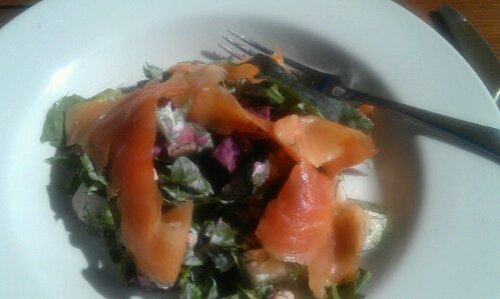 The gorgeous Scottish waiter (he’s just so cute and very personable) returned and asked if everything was alright. I mentioned I was disappointed with the salad and why. I don’t mind radish, but there is only so much a person can eat. After taking stock as the criticism wasn’t expected, he said they were tweaking the menu but I was not the first to mention a dislike for the salad.

On checking if we wanted something else I asked they had any fudge out the front. (As you come in the front doors and head around to the bar and outside area they have a recessed shelf where they display the small sweets like muffins, scones, fudges and brownies, or whatever they have been baking). Yes they did, and which one would I like, the Bruny Island Chocolate or the salted caramel? Surprise me. That stumped him for a minute til my friend said she would take the other one. So one of each way ordered.

I often say ‘surprise me’ when being asked for desserts as I tend to want all of them equally and I really don’t mind what I have. Not everyone appreciates it though, thinking they night get in trouble if I don’t like what I get?? We both a giggle about that, and it was mentioned about being jumped on the way to the ladies.. Not quite what I meant about ‘surprise me’ 😉

The fudge was pure melt in the mouth delight and next time I will definitely be trying the caramel. Coffee is nothing amazing, it’s not bad, but I won’t make a beeline there just for the coffee. My total for lunch, a mere $23. Not a bank breaker, but not an everyday meal either. For under $60 two people could quite easily have a lovely lunch, coffee included.
How could you not enjoy eating outdoors at a place like this?

Enjoy some more pictures of Peppermint Bay at my photo blog, Box of Photos. Find the link over to the right somewhere.

From my little piece of Paradise, have a great weekend 🙂
Jen x

For any non Tasmanian readers (or those unlucky enough to have not been this far south, and any new readers who don’t know) this is the best picture to illustrate where I live.
The other side of Bruny Island (to the right hand side) is the Tasman Sea which stands between us and New Zealand.

And the view I have while on my verandah…which most of you have seen before. 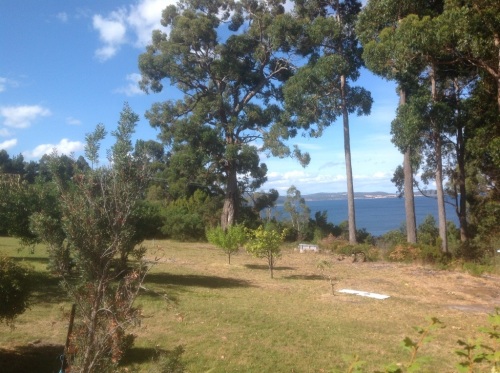 It’s time again..to move house.  You’d think in the last couple of months after moving and then house sitting I wouldn’t want to do it all again.  Packing and unpacking.  you know what, I actually don’t mind it.  Probably because I’ve done it so many times, I’m not so bad at it.  Pretty organised actually.

We were prepared with either house sitting or caravaning for 6 months onward to save a few dollars but it’s only been 6 weeks and we are ready for our own place already.   I think we’re supposed to have our own house and space….  So after just a week of checking out rentals on the internet we saw a house – perfect! – that had just come up and after looking through all the pictures knew we had to have it.

Organising to look over the property we also picked up the application form so if we really liked it we would be able to hand it in straight away.  Which is exactly what we did.  A bedroom each for the boys and an ensuite for me.. being the only girl I like to have some kind of privacy in the bathroom.  The shagpile carpet is very 70’s in it’s colouring and a pain to vacuum is just lovely on the feet.  The kitchen that was rather kitsch in decor and smallish included a walk-in pantry!  Then there’s the laundry – my sort of laundry – huge with lots of space and an entry from the carport makes it perfect for those wet days with the groceries.

I was trying to be nice and not take over the living room (like I did in Isa) with my beading but hubby stated that since he wouldn’t be there most of the time it wouldn;t be an issue.  Plus he doesn’t want me in the shed – way down the back of the block – which is fine by me.  I have picked a space that is near one of the bay windows which will give me huge amounts of natural light.  There is lots of lawn and space for the boys to go silly and enough places for me to go walking up and down hills.

That’s another thing… it is on top of a hill – good for great veiws etc but it means wherever I go walking I will, with one exception have an uphill walk to get home.  Just means I work harder and get fitter that little bit quicker… well I hope so anyway.  Then there’s the view.  Just gorgeous.  Overlooking the D’entracasteaux Channel and Bruny Island while facing east means there will be plenty of spectacular sunrises and also the chance for lovely sunsets too.  I’m a sucker gor a good sunrise/set, the colours along with the clouds and water make them even better.

So with three weeks til 1) hubby returns and 2) parents return and want their house back, I will be repacking books and beads and toys back into the boxes that weren’t damaged and getting ready to go again.  One small thing, although hubby will be home for 9 days this time there will only 4 where we can actually move into the house before he has to fly out again.  Which will leave me to do the bulk of it – as usual – once  he’s gone.  Like I said, I don’t mind, I’ve done it enough times, and I kind of enjoy the finding of places for everything and the chance to set things up…

I will hopefully find some piccie to show you before we move in, but I took one today of it from the road… showing how private it is from the highway.  Which suits us just fine.